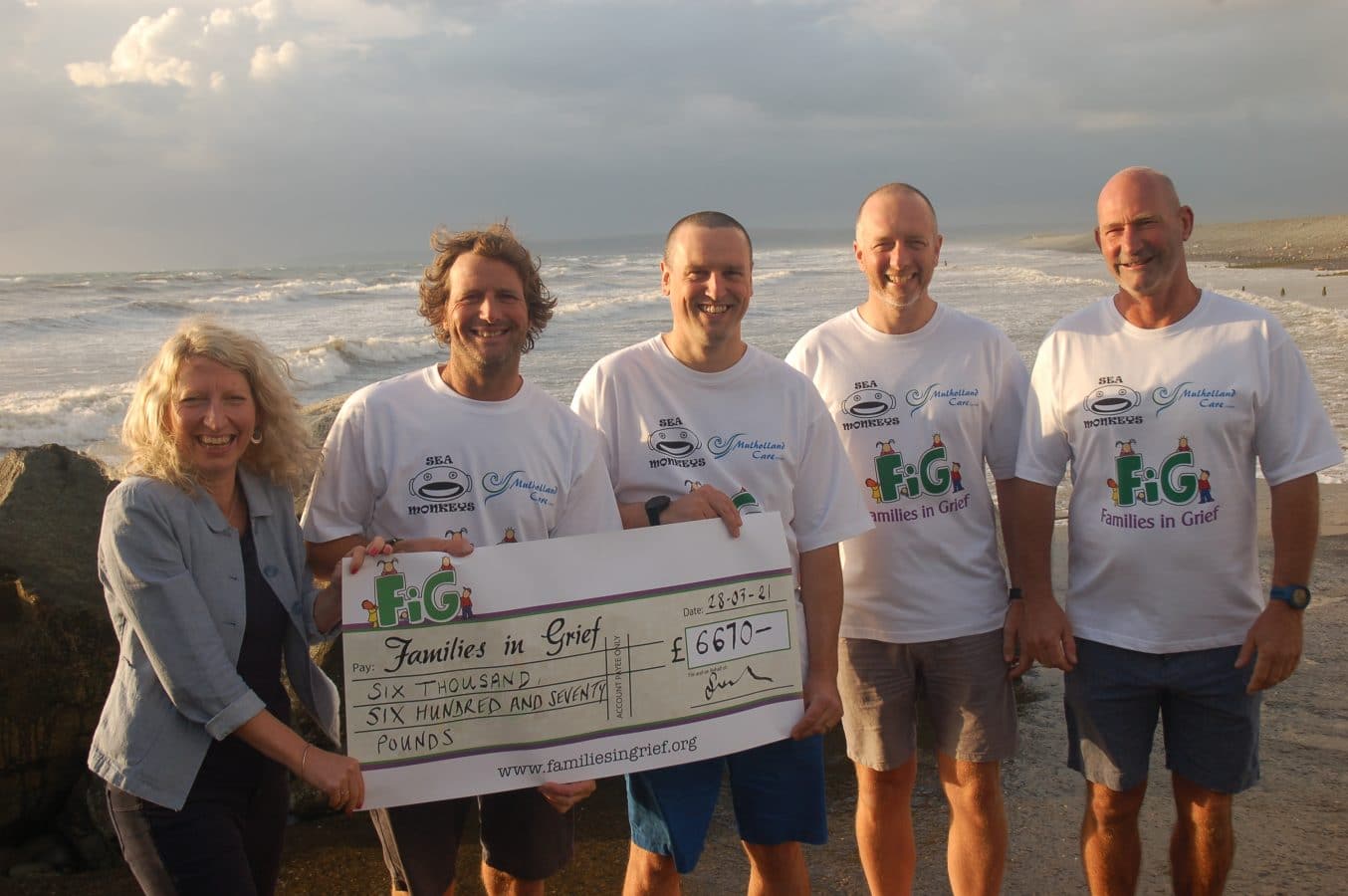 A team of swimmers from North Devon has boosted the coffers of bereavement charity Families in Grief (FiG) by a whopping £6,670 (including Gift Aid) after swimming the English Channel in a relay.

Jason, team lead, started the swim from Samphire Hoe Beach in Dover at 15:55 on 1st July with the next swimmer taking his turn in the water an hour later. After 14 hours and 15 minutes, which included swimming through the night and covering 21 miles, David Baxter finally walked out of the water and stepped onto the pebble beach at Wissant, France.

But it was tough! The weather conditions were far from ideal for open-water swimming with cold temperatures, high winds and rolling seas impeding their progress in the water and causing sea sickness. It meant the original plan for the team to attempt to swim both to France and back was not possible.

“Conditions were not in our favour on the day and so it was not meant to be that we swam both ways,” says Jason. “The team and I are immensely proud with how strongly we swam and persevered to touch land in France which was a truly special experience.

“We have been overwhelmed by the generosity and messages of support throughout, so a huge thank you to everyone. Along with the achievement of swimming to France, there is so much inspiration and positive energy to take forward knowing that FiG can continue the amazing work they do helping families through some of their most difficult times.”

The team was also supported by a generous donation from Mulholland Care Limited, which provides personal care to people in their homes in Bideford and the surrounding area.

The Sea Monkeys chose Families in Grief after the charity supported Jason and his family when his mother died.

“We cannot thank the Sea Monkeys enough – they are so inspiring! We are a small charity so these funds will make a real difference to our families,” says Emma Marston, General Manager of FiG. “The money they’ve raised will help us to offer all areas of our support to ten bereaved families – this includes supporting parents over the phone, visiting families at home or their children at school and offering resources, through to helping every member of the family through our support group sessions where they get to meet others who have also been bereaved.

We are so grateful to the Sea Monkeys – their efforts will make such a positive and long-lasting difference to our grieving families. It is hard to place a value on that.”

And what next for the Sea Monkeys? Jason is already planning a new challenge. “A few conversations have already started taking place and although there is nothing certain yet, I’m sure this is not the last time we’ll be hearing about the Sea Monkeys!”

Share this:
← Please Donate Now
Do 15 things for our fifteenth! #15forFiG →