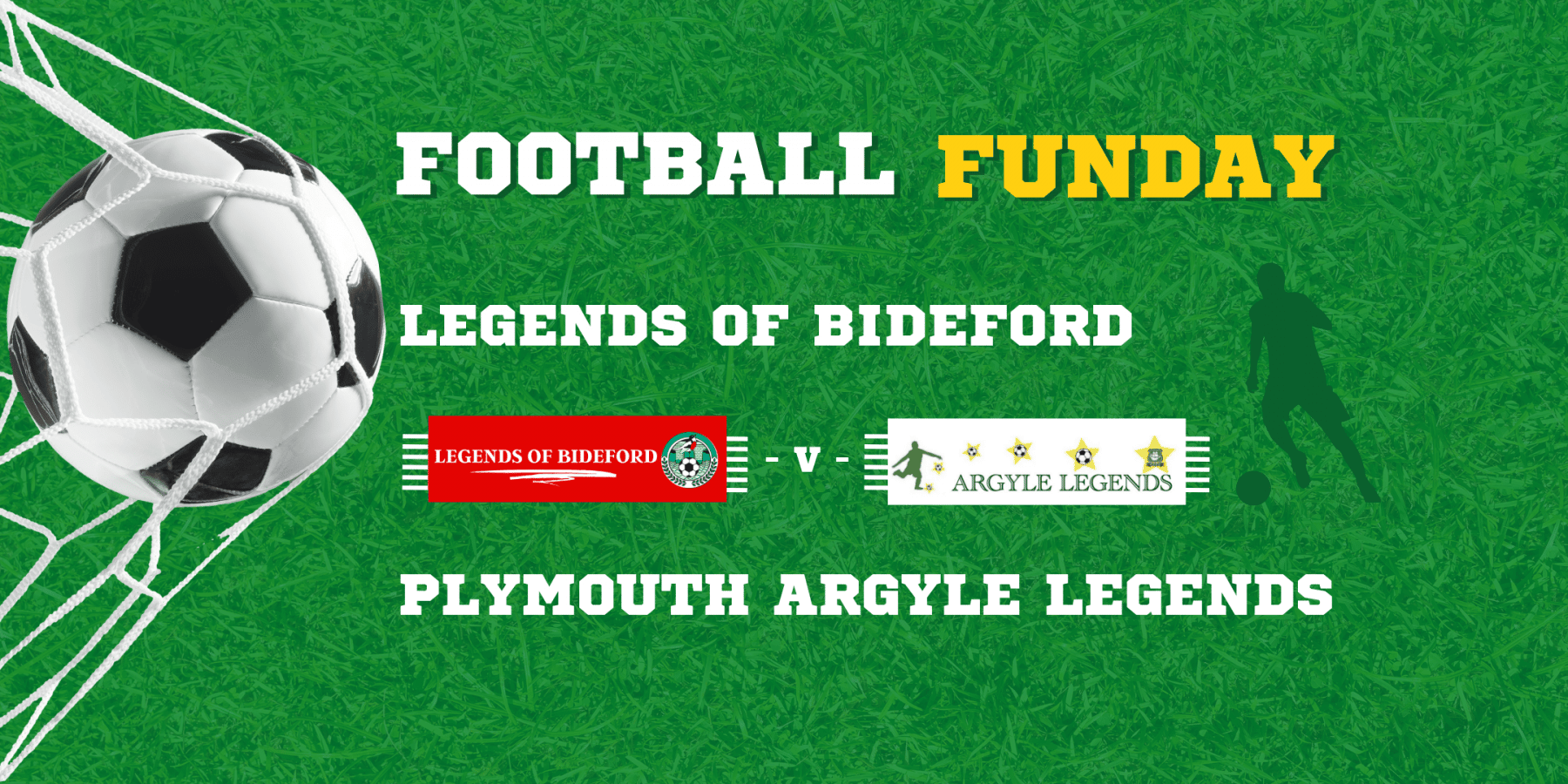 The home of Bideford AFC is getting ready to welcome the mighty Plymouth Argyle Legends team to play against the Legends of Bideford for a fantastic Football Funday on Sunday 14th August 2022.

Gates will open at 12.00 with kick-off at 15.00.  Before kick-off, there will be live music from covers band Whole 9 Yards and football-based games for all the family, as well as bouncy castles. The bar will be open and food will be available to grab a bite before the match starts.  It promises to be an enjoyably competitive afternoon of football action, with the added bonus of entertainment for all the family, both pre and post-match!

Individual tickets are on sale at £8.50 and accompanied Under 16s go free.  Tickets can be bought online at https://legendsfootballfunday.eventbrite.com or bought at the gate on the day (cash or card). Proceeds will go to support local childhood bereavement charity, Families in Grief (FiG).

As you will see from the proposed team line-ups, the match will bring together two impressive sides and many familiar faces from Argyle– including, potentially, Gary Sawyer, Marc Edworthy and Luke McCormick, and from earlier times Leigh Cooper, Kevin Hodges and David Byrne.  Up against them will be Darren Hawkins, Ellis Leight and Ryan Draper and many other familiar names on the Bideford side.

The event is organised by Rotary Club of Hatherleigh, who recognised the role football can play in engaging bereaved young people, such as those supported by FiG. All participants are giving of their time and effort to create an afternoon of football and fun for all ages.

Peter Townsend (President of Rotary Club of Hatherleigh) says: “We are pleased to be able to organise this event, in conjunction with Argyle Legends, Bideford AFC and other local North Devon based Rotary Clubs, in support of such a great cause.  Families in Grief are close to our hearts and we want both to raise funds for them and widen their profile throughout our area.  Your support of this exciting event continues the work that Rotary Clubs nationwide do to support and assist local, national and international worthy causes.”

Emma Marston, Director of Families in Grief, says: “I am delighted Plymouth Argyle Legends are coming to Bideford to help us to raise vital funds for bereaved families in the area.  Their support, and that of our own amazing Bideford legends, is hugely appreciated. We are really looking forward to a fun afternoon!”

Argyle Legends have been in existence for almost 18 years and during that time have become one of the largest and most active Former Players Associations in the country. During their 18 years of existence, they have helped to raise almost £170k for charities and take part in around eight football matches each year throughout the South-West. The Legends are managed by Paul Hart.

About Legends of Bideford

The match day squad has been kindly organised by Keith Shapland. Keith, a massive Burnley fan, is very well known in North Devon Football and has successfully managed a number of local sides including Appledore and Shamwickshire Rovers, leading both to various league and cup triumphs! A handy player in his day, he is looking forward to pitting his wits against former managers of his in John Hoare and Leigh Cooper!

Keith has assembled some great names from Bideford’s past including Darren Hawkins, Ellis Leight, Ryan Draper, Lee Groves, Matt Hare, Ian Down, Kevin Squires & Alan Chapman. Other local players will be involved and they all can’t wait to step onto the hallowed turf of The Sports Ground once more!